0
by the Face in Fiction, Fiction - Horror, Promotions 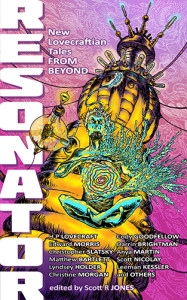 RESONATOR: New Lovecraftian Tales From Beyond drops officially at the end of this week! FRIDAY MARCH 13th! A day that will no doubt live in some kind of infamy, according to our recent tea leaf readings and repeated exposure to cosmic rays in our specially constructed ray-harvesting bunker! (Ahh, the things we get up to for fun here at MMP HQ! We can’t even, not even.) Anyway, you can still PRE-ORDER the paperback edition of RESONATOR HERE (until Thursday, naturally — jeez! Tomorrow? Yes.) and not only save on shipping costs (anywhere in the world!) but be entered to win the sweet original art by Nick Gucker that we used for the cover! That’s all kinds of pineal-stimulating win, right there. So, go do that, and then come back here to read this swell interview that anthology editor Scott R Jones did with RESONATOR author Lyndsey Holder! (We’ll be rolling out interviews with most of the contributors over the next two weeks or so, so check back often for added awesome.)

Lyndsey, your story, Parasitosis, has a remarkable crackling energy to it, largely due to the poetic choice of having your Resonator technology induce a synaesthetic response in the user. Colours you hear, language you feel on your skin, vignettes that impose themselves over reality the deeper one goes into the experience. Synaesthesia is a little known condition; what made you want to work with it?

I’m fascinated by the human body and its weirdness: all of the strange little things that some of us can spontaneously do that make us so different from any kind of artificial intelligence. I grew up in the 1980s, when the prevailing attitude was that technology would eventually outshine all of humanity. After having worked in an operating room for a while, I’ve come to believe that human bodies are far more complex and amazing than technology could ever be. Also, I personally have orgasms to colour synaesthesia.

Neat! The creatures your narrator encounters in the spaces Beyond are sentient, scheming things, with an active interest in using her for their own ends, which I found made a nice change from the usual run of mindless hungry blobs. It stands to reason that a Beyond ecosystem (or as I started to call it, an “eeek!-osystem”) would have highly-evolved, thinking beings somewhere in it. Which would you find more horrific: consumed by an extra-dimensional jellyfish or enslaved by (for lack of a better term) a junkie demon?

Being eaten has an end point at least, though I can’t imagine jellyfish, even extra-dimensional ones, being terribly quick eaters. They probably have lots of fun neurotoxins they’d hit me up with, though, so there’s that to look forward to. Anyway, having stared into what I was fairly certain was my own impending doom more than once, there’s something freeing about letting go when you’re in that moment, when you see your own death looming immediately ahead of you and you are sure that there is nothing you can do to stop it. Most of us spend every waking moment running from our own mortality so there’s a profound sense of relief when you feel that Death has finally caught up with you and you don’t have to run any more. Being trapped by junkie demons is far more insidious, because your cage is something that is intangible. When you can’t see the walls of your prison, how do you know where they begin and where they end? How do you tell your fellow inmates from your jailers?

You’re fairly new to being published; Parisitosis is, I think, your second story published and the first in print. How are you finding the experience so far? Any writing goals you’d like to share?

I’ve been trying to be a lot more visceral with my writing lately, which is both liberating and terrifying. Putting a lot of myself into my work makes the process of writing a lot more of an adrenaline rush, but it also makes submitting it a lot more tense – I sometimes feel like I’m showing up naked on someone’s doorstep and hoping they don’t laugh at me.

No one’s laughing, trust us! Where can we find more of your work in 2015, Lyndsey?

My story Chosen will appear in Innsmouth Free Press‘ upcoming anthology She Walks in Shadows in the fall. I’m also working on a project with some other incredibly talented women with collagen disorders, the proceeds of which will be used to help us all meet together in person in November this year. It’s still in very early stages of planning, but I’m very excited about it.

Always a pleasure, Lyndsey! We’re very happy to have you in RESONATOR and we look forward to watching you rise!

From Beyond Lovecraft Lyndsey Holder Parasitosis RESONATOR: New Lovecraftian Tales From Beyond She Walks In Shadows Tillinghast Resonator
Go to Top