The Voyeur at the Threshold: Shimizu Takashi’s “MAREBITO”

0
by Scott R Jones in Reviews

(this review appeared originally on the Lovecraft eZine, May 23, 2013) 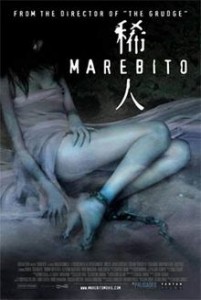 J-horror films rarely tread beyond their traditional revengeful ghost-children territory (or at least, the films that see release beyond Japan don’t) so it’s refreshing to come across Marebito, (loosely translates to The Stranger From Afar, apparently) which is undeniably weird, disturbingly perverse, and, though its treatment of the themes is heavy-handed and clumsy at times, definitely a Lovecraftian film.

This is a film set against a backdrop of holes, abysses, caverns: all the hollow places in the earth and in the human mind. Appropriately enough, it was filmed in the 8-day hole between director Shimizu Takashi’s two Juon (aka The Grudge) films. It’s a film about emptiness and the madness that results from contemplation of that emptiness: the things we do to distance ourselves from it or encounter it more deeply. Marebito’s protagonist Masuoka (a freelance  professional cameraman), does both, often at the same time, using his always-to-hand video equipment as combination filter and microscope. He is a fully urbanized human, sheltered and fed (and feeding upon others) through the media that cocoons him.

As a story, it’s also full of holes: hard-to-parse gaps in the narrative that make it difficult to follow, character motivations that seem to come out of nowhere and are barely resolved before disappearing. Dropped hints. Suggestions of tunnels that could be travelled down but fade from the film’s memory in only minutes. This could be deliberate on Takashi’s part, an attempt to induce a paranoid dream-state in the audience, or it could be the result of the speed of filming. Chances are also good that this narrative disorientation is entirely a cultural thing: I admit I haven’t watched a lot of J-horror (outside of The Ring) so I am perhaps unfamiliar with some of the subtleties.

Our pill-popping and voyeuristic cameraman becomes obsessed with the look of horror that he captured in the face of a man who killed himself (in what we’re to understand is a sudden and gruesome fashion) in a subway tunnel. Why Masuoka was filming a suicide we’re left to guess, but it’s clear he’s not entirely well, mentally. In any case, his obsession with learning the fearful thing that drove the dead man to suicide leads Masuoka deep below Tokyo, down endless Escher-staircases, to a place he begins to call the netherworld. Along the way he encounters the ghost of the suicide and they engage in a philosophical discussion on such occult subjects as the Hollow Earth and crank favourite Richard Shaver’s DEROs (or Detrimental Robots). Masuoka shows the ghost the video of its own death, causing it to vanish.

Further descent brings him to a place he calls “Mountains of Madness” (using some clever but very low-budget matte photography effects, the actor appears to wander across unreal landscapes) where he encounters a thoroughly creepy, pale girl, chained by her ankles to the wall of a small grotto or oubliette. As singular, horrific images go, this is pretty unsettling stuff, which I assume is why it’s used in many of the promotional materials. Mute, catatonic, and more beast than human, Masuoka nevertheless decides to free the girl and return with her to the surface world, where he deposits her in his closet-apartment, a space jammed to the ceiling with surveillance and video equipment. The girl (who he calls F) folds herself into the smallest space she can find (under a futon) and falls asleep. Through the rest of the film, Masuoka monitors her via various linked cameras and his cell phone. Naturally, odd things begin to happen, both in the collected footage and in the increasingly fractured perception of Masuoka. F begins to deteriorate, and her captor receives calls on his phone from artificial voices who advise that she is dying, that she should not have been brought to the surface. By accident, Masuoka learns that F can only tolerate blood as nourishment, and though animal blood will do, she really enjoys the human variety. If this listless, autistic creature is a vampire, then she is one of the weirdest ever in film. Masuoka, no less a monster, and already far removed from the normal human social spheres by his work and voyeuristic fetish, has little trouble taking the next logical steps in keeping his bizarre pet healthy.

One thing leads to another (even as the straight-ahead narrative gives way to greater and greater porosity) and by the end Masuoka becomes a classic Lovecraftian protagonist, consumed by his obsession and destroyed by the very knowledge he sought.

Visually, Marebito is ugly and flat looking, a fault due mostly to the cameras used. Flat, but also real as a result, and the home-made, voyeuristic feel of the film gives it a very disturbing vibe. I could imagine coming across this footage and being instantly alarmed by some of the contents.

Shinya Tsukamoto (as Masuoka) is sometimes clumsy in his emoting (there is a scene where F drinks blood from a cut on his finger and he is either trying hard not to laugh or is actually aroused; who can tell?) but overall he manages to depict a depressed, fetish-burdened man descending into horror and insanity fairly well. However, the over-use of internal monologue narration by Masuoka, although effective in the first quarter of the film, tends to become droning, soporific, and fails to capture the emotional tension as his madness descends upon him. Again, this might be a deliberate choice, but it was an off-note for me.

Tomomi Miyashita’s performance can only be described as intense. Her portrayal of the catatonic underworld vampire F has the severity and simplicity of Noh theatre: her postures and expressions, her bestial vocalizations, everything about her is thoroughly unpleasant and creepy. Whenever she was on-screen, a line from Lovecraft’s The Festival kept going through my mind…

Great holes are dug where earth’s pores ought to suffice,
and things have learnt to walk that ought to crawl

And that was Marebito for me: an uneven, extremely porous and shifty narrative film experience that was at the same time (and perhaps for the same reasons) effectively dreamy and nightmarish. I’m not sure it would stand a second viewing (due to its cheapness and hole-y plot) but as a late-night venture into a part of horror culture I’m not over-exposed to, it was pretty good.