Cold Blades and Cosmic Blasphemy!: A Review of “Sword and Mythos”

Though I grew up in the era that saw the rise of Dungeons&Dragons as a cultural touchstone, I was largely clueless about the genre it drew most if not all of its cues from. An example: I had no idea what those kids were playing when I saw E.T.: The Extraterrestrial as a boy. 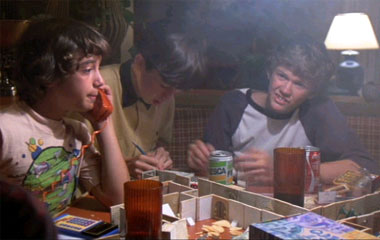 Child Me: "What're they doing?" Dad: "Satanism. They're doing Satanism."

I thought it was some kind of club meeting or something, and wondered when the spaceships were gonna show up. (I suppose it was a club meeting, after a fashion. And I was always waiting for spaceships to show up, anywhere.) This remained the trend into my teens: I was more into Heinlein than Hickman, more Bradbury than Brooks, more PKD than Piers Anthony.

When I did finally get into Sword & Sorcery, it was only through the British New Wave, and the work of Michael Moorcock, especially…

Elric. SO GOTH OMG. So not-Fruedian at all.

And back from there, to Fritz Lieber’s Fafhrd and the Grey Mouser stories, to REH and Conan, and finally to Clark Ashton Smith, who I was learning about at the same time I was first encountering HPL. And even then, I burned out on Sword & Sorcery early, finding the majority of the stuff (aside from the greats already mentioned) to be derivative and dull. It’s a genre of necessarily broad strokes, easily becoming a parody of itself.

So, I was prepared to be underwhelmed by Sword & Mythos, the new anthology from Innsmouth Free Press that melds S&S with the cosmic beasties and themes of HPLs world and worldview. The Cthulhu Mythos is itself a genre (or a thematic idea that attaches itself to genres, leech-like) that crumbles into pastiche in less-than-sensitive hands.

Thankfully, the diverse hands at work here are sensitive indeed, and editors Moreno-Garcia and Stiles have collected stories that are thoughtful, energetic, creative fusions that are (with one exception) a joy to read, and I’m happy to report there’s not a blonde-headed reaver of the standard S&S type anywhere.

Locales and times visited here range from Africa (Maurice Broaddus’ The Iron Hut and Thana Niveau’s The Call of the Dreaming Moon), ancient Palestine (Ed Erdelac’s incredibly muscular and horrific The Wood of Ephraim), primal Mesoamerica (Nelly Geraldine Garcia-Rosas’ creepy In Xochitl In Cuicatl In Shub-Niggurath), the island nations of Java (Nadia Bulkin’s regal Truth is Order and Order is Truth), and imperial China (the tone-perfect and truly excellent The Sorrow of Qingfeng by Grey Yuen), to more mythic zones: Arthur’s Britain (Adrian Chamberlin’s The Serpents of Albion), the Carcosa of Chambers (Sun Sorrow by Paul Jessup), and an interdimensional hell-realm ruled over by an avatar of Nyarlathotep (E. Catherine Tobler’s And After the Fire, A Still Small Voice).

This latter tale was a standout for me, and a good example of what makes Sword & Mythos such a good collection: Tobler’s heroine here is someone familiar to readers who know their history, and the tragic nature of her plight, and the nuanced way Tobler hints at her identity and reveals her character through the narrative is masterful. (I won’t spoil the reveal.) This mastery is on display in most every selection here, whether it’s used in the service of humourous broad-chested bombast (Balogun Ojetade’s Black Caesar: The Stone Ship Rises), revealing the terrible costs of sorcerous contracts (Spirit Forms of the Sea by Bogi Takács), or cleverly deconstructing the Mars of Edgar Rice Burroughs (Jon Carver of Barzoon, You Misunderstood by Graham J. Darling) and fairy-tale tropes (Orrin Grey‘s little gem, The Bones of Heroes). Each author’s mash-up of the genres is fresh and interesting, and their characters are anything but cookie-cutter Conans. There are plenty of strong women (I do not mean the execrable Strong Female Character), fully eight of the fifteen tales have female protagonists; and people of every race (human and otherwise) besides. This is an anthology that attempts, and I believe succeeds, in presenting a very wide world to the reader. “Myopic” is one thing Sword & Mythos is not, which is incredible, considering the subject matter.

The only exception to this rule, in my reading, was an irritating tale by the prolific William Meikle, No Sleep for the Just. This featured a sentient blade and its English master/slave versus a fairly standard Dagon cult. I’ve enjoyed Meikle’s stuff elsewhere, but here he employs a stylistic tic of italicizing certain words again and again (the sword is constantly thrumming, there are fish, and things, and so on), an amateurish effect that pulled me right out of the story. Maybe it’s my early exposure to the cult of Moorcock, but the living sword here could have been done so much better, as it is in the other, superior tale here, Jessup’s Sun Sorrow. Diana L. Paxson’s Light was similarly clunky, but I put that down to the modern day setting (an archaeologists dig, manned by at least two SCA members, possibly more, and referencing that organization at least once) meshing  poorly with elder Norse mythology more than anything else, and it is nowhere near as grating as Meikle’s entry.

Sword & Mythos finishes up with a quintet of short essays on the literary underpinnings, historical and otherwise, of both genres. Highlights here are G. W. Thomas and his Conan and the Cthulhu Mythos (a nice breakdown of the partnership-on-the-page of REH and HPL); editor Paula R. Stiles marks out the fine lines of the genre in What’s So Great About Sword and Planet?; and editor Silvia Moreno-Garcia has some fun with the Mexican comic-books of her youth in Spanish Conan: Manos, Guerrero Indomito.

Another great anthology from Innsmouth Free Press, easily one of the best small presses out there. Recommended. You can purchase the print edition directly from IFP and the title is also available in e-book formats (I strongly urge you to go print on this one: as with all IFP titles, it’s a very nicely put together book.)

Scott R Jones is the author of the short story collections Soft from All the Blood and The Ecdysiasts, as well as the non-fiction When the Stars Are Right: Towards An Authentic R’lyehian Spirituality. His poetry and prose have appeared in Innsmouth Magazine, Cthulhu Haiku II, Broken City Mag, and upcoming in Andromeda Spaceways Inflight Magazine.

This entry was posted by Scott R Jones on 05/16/2014 at 2:29 PM, and is filed under Reviews. Follow any responses to this post through RSS 2.0.You can leave a response or trackback from your own site.